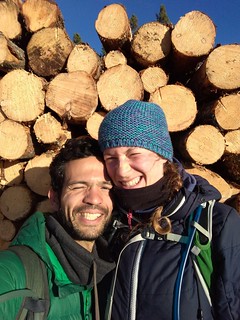 We’re Pedro and Sarah – both trained as renewable energy engineers but happiest when outside on our bicycles rather than in front of a computer. When we are not cycling or in a tent, we are rock climbing, hiking, swimming or what we end up doing the most… picnicking.

We packed up our home in Lisbon, Portugal in June 2018 and left with a reduced version stowed away on the back of our bicycles. We planned to pedal in a vaguely easterly direction and take our time to reach Vietnam… or Japan or maybe Mongolia. We didn’t really know.

We had wanted to continue. We had hoped to make it back to Europe overland (or over water but not over the sky). However, our ambitions were cut short and we had to change our plans. Many times. As chaos erupted and borders closed around the globe, plans were made and remade. At one point we had tickets from Vietnam to Japan, Australia and back to Lisbon, all on the same day! In the end, home became where us and our bikes could be safe for a while, and where we would be close to loved ones.

Although our travels were cut short, our ambitions were by no means made any smaller. They grow by each passing day and new dreams have been already made which keep our legs itchy for more pedals and our minds eager for more adventures.

– home is where your bike is