Some years ago, I met my parent’s new neighbours in Ireland : Liam and Ayna. From accent alone you could tell Liam was a local, but Ayna said she was from Turkmenistan. My teenaged self nodded her head, wondering, literally, where on Earth that was. Some years later, we were planning to cycle across the country. Travelling by bike has many positives, one being that your global geography massively improves!

It was time for Turkmenistan. A country that gets fewer foreign visitors per year than North Korea and which is renowned for its bizarre laws, based on the desires of the President at the time. The first president, decided to ban smoking in public, because he was trying to to quit smoking himself. The second president continued this theme and banned black cars in favour of white cars thinking that the colour white would bring good luck.

Bizarre laws aside, getting into the country was the first major visa hurdle that we would face. Obtaining a tourist visa is near impossible, unless you go as part of a very expensive organised tour, and so the remaining option is a transit visa, the success rate of which is more like that of a lottery than anything logical. From the stories we had read, there was no rhyme or reason for the embassy’s decision making, but speculations were rife: you were more likely to get the visa if you applied at the beginning of the month, men with beards wouldn’t be allowed in, there was a threshold on visa numbers for different nationalities, solo travelers were less likely to get a visa : nobody knew.

For the privilege of entering the Turkmenistan visa lottery, we had to pay 10$ each in Tehran and then wait ten days. If we got the visa we could continue East, if not we would have to cycle back West to Azerbaijan to catch a boat across the Caspian Sea.

Despite Pedro’s beard however, we got the visa! How happy we were! The visa would cost us 55$ each, and yet it would still only allow us five days to transit through the country. Four and a half really, given the opening times of the border and the lengthy processing at either side. On top of that, at the border there would be an additional 12$ tourist tax each.  Basically with an upfront cost of 134$, and given that we could be in the country for only five days,  Turkmenistan was already outside of our budget… And we hadn’t even entered or bought any food.

The alternative however, was catching the ferry with no timetable across the Caspian Sea and at 79$ per person, plus a visa for Azerbaijan and an extra odd 1000km to cycle, was even more expensive. Turkmenistan it was.

As we crossed into the Turkmenistan side of the border, a border guard smiled and indicated I could take of my headscarf. Freedom! Happily de-hijabed our bikes and ourselves joined the scrum to get on the compulsory bus towards Ashgabat. People piled on, elegant, brightly dressed women squashing themselves into seats between and next to men. It was a refreshing sight to see after the segregation in Iran.

Back in our steads, we wooshed down the remaining few kilometres towards the city. We had heard that Ashgabat has so many marble buildings, the highest density of any city, that it has gained the nickname “The White City”… But nothing can prepare you for the sight.

A white haze appeared on the horizon, we wooshed through a white arch embellished with gold and the haze morphed into towers and domes. Grand white marble buildings lined empty six lane highways, being swept by women with brooms despite the fact that it was really already very clean.

In-between the shiny white buildings, lay empty but immaculate parks. In Iran these would have been filled with tents and picnicing families, but here they were deserted.

It felt as though we were cycling through a theme park, but instead of rollercoasters you had shiny white buildings, ornate lampposts and the fanciest bus stops either of us have ever seen. In Europe you’re lucky if you get a seat under a shelter, here they had air conditioning!!

Even as we got into the city centre and the numbers of cars increased, the city felt like a calm haven in comparison to the chaos of Iranian towns and cities. People knew how to use roundabouts! It was amazing.

We headed to the train station to try and buy tickets for later that afternoon. The platform was jam packed with people, perched in every available patch of shade. As we rolled our bikes along, a chain reaction of turning heads followed. There was no train for a few hours, but waiting a long time for a train you were going to sit on for a long time seemed to be the thing to do.

Buying tickets was an experience in itself. The Turkmen people didn’t seem to love queuing quite so much as the British and so elbows had to remain out, to make sure you didn’t stay at the back of the queue forever. Alas, as we could have guessed from the crowds of people on the platform, tickets for that day had sold out. Another concept unfamiliar to anyone that has ever lived in the UK. By the power of sign language we left with tickets for the next day, happy in the knowledge that this would mean we could meet Ayna’s mum.

We spent the afternoon enjoying gliding through the city on the smoothest tarmac we had seen in months, weaving in between white cars, along streets lined with white lamposts, oogling at white buildings and space-like white monuments. There seemed to be police men (not dressed in white) on every other corner, doing what we are not sure, more often than not they were sat on a bench chatting. In fact it felt that 1/3 of the people we saw were policeman, other 1/3 people cleaning the already clean streets and only the remaining 1/3 ordinary (yet very elegant) people.

Ayna had passed on a good list of contacts of friends and family in Ashgabat, so despite being in a country where most foreigners pass through in five days, it felt like we had a good support network!

With our train not for another 24 hours, we went first to join a 78th birthday party before spending the night with Ayna’s mum. We had no shared language, but photos, laughter and sign language did the job perfectly.

The next day we left the gleaming white city behind us and headed back to the train station to take us to Darvaza. This caused some confusion in two ways : we had bikes, somehow people always make a fuss about putting a bike on a train, when in fact combined they make the best transport; secondly our carriage companions were perplexed as to why we were getting off the train in the middle of the night in the middle of the desert.

Darvaza gas crater has been burning for the last 40 years. Some Soviet geologists were drilling for natural gas when their equipment fell into the hole and gas started to escape. One of those bright sparks thought it would be a good idea to light the gas being released, thinking that the available gas would burn off somewhat more quickly than it has. It lasted so far 40 years and there is no prospect of stopping any time soon.

It was a bizarre sight, seeing the glowing crater appear on the horizon as we came towards it. As we approached we could feel the uncomfortable heat eminating from it and didn’t appreciate its depth until we peered over the edge. Pedro definitely didn’t stand on top of the railing to get a better look… Definitely not….

Choosing where to camp by the crater had to be carefully considered. Camping down wind of the crater increased the ambient air temperature by even more degrees Celsius than it already was above 30° despite it being 10pm at night.

The next day, we had to wait all day in the desert for our train to the border to arrive. Thankfully there was a cafe nearby and we spent all morning there, nursing cups of tea and trying to find anything vaguely vegetarian in their kitchen in-between talking (in sign language) to the locals that came and went.

Feeling that our stay in the cafe had been extended beyond what was reasonable we pedalled the few kms back to the train station and continued our waiting game there. Here there seemed to be 8 people employed to work at a station that gets four trains stopping every 24 hours. This seemed a little excessive. As we drank tea, hid in the moving patches of shade playing spot-the-camel and tried to keep ourselves amused they tried to keep themselves amused also. For some reason, their work days seemed a little low on productivity.

Eventually the train rolled into the station, our bikes and ourselves shoved onto the train, and we bundled ourselves into our bunks as the train took us towards Uzbekistan.

Our stay in Turkmenistan was brief… And strange. Two and a half months later we’re still not sure what to make of it. We’re glad we got the opportunity to travel through a small section of the country, but not sure we’ll be back anytime soon! 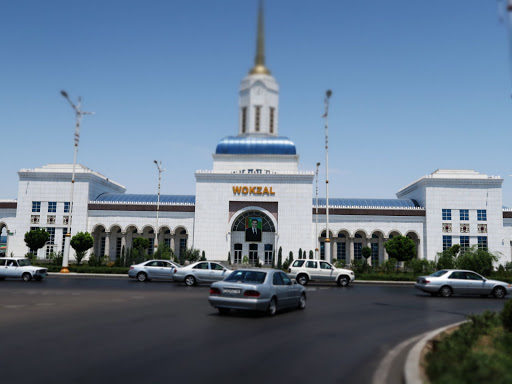 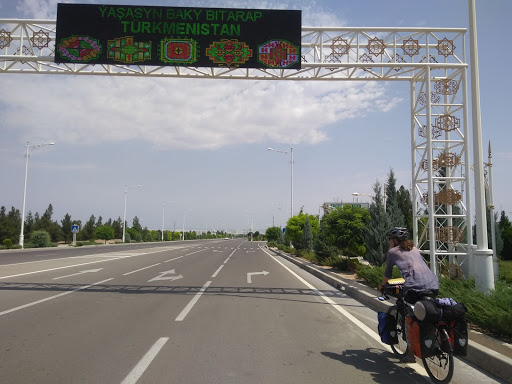 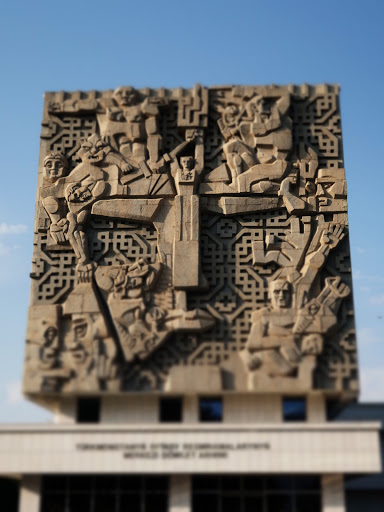 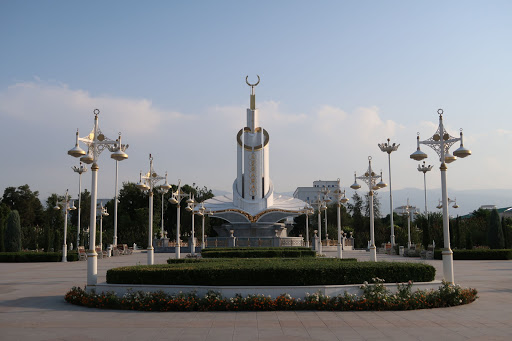 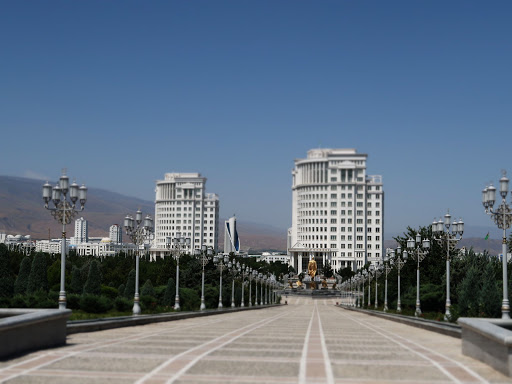 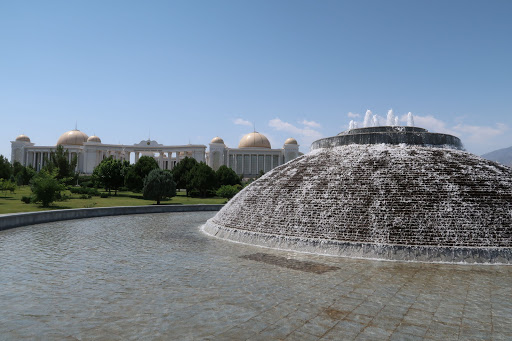 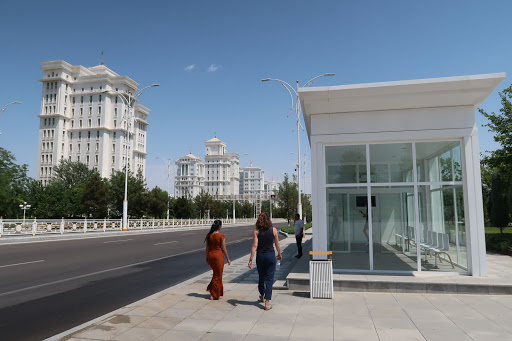 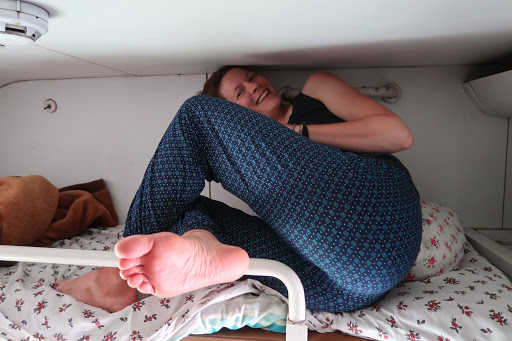 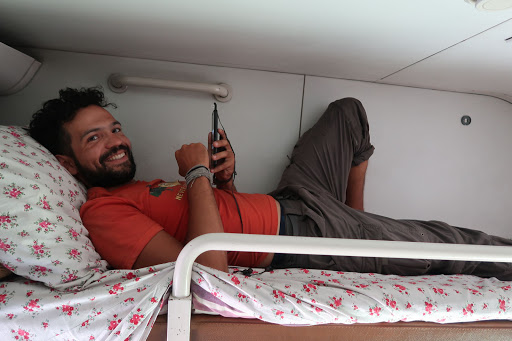 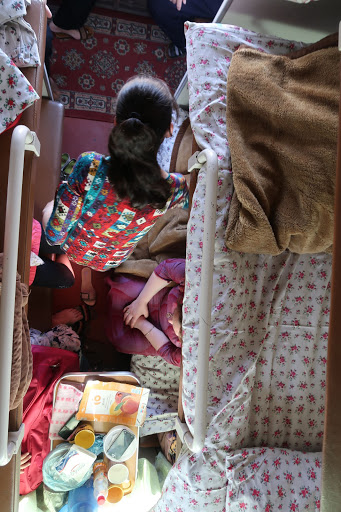 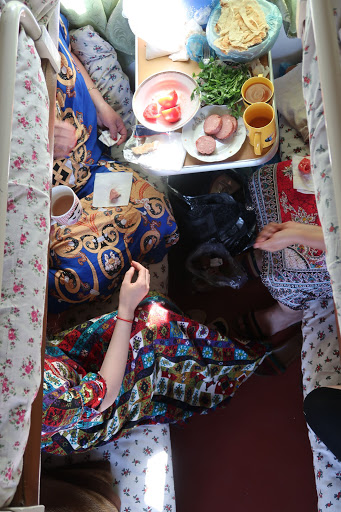 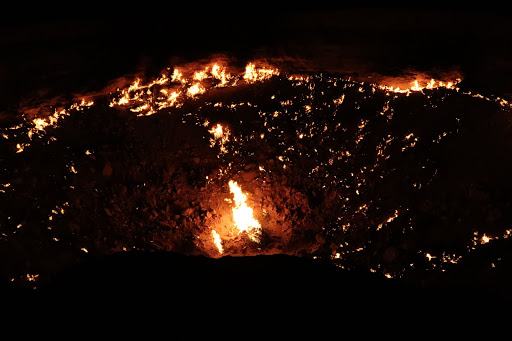 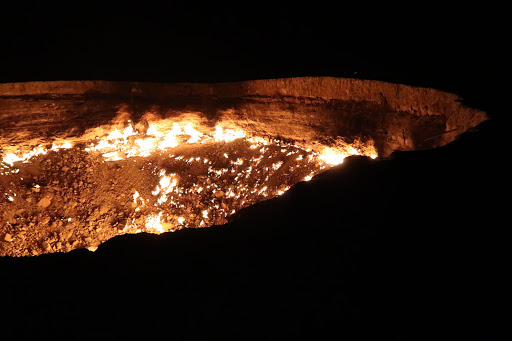 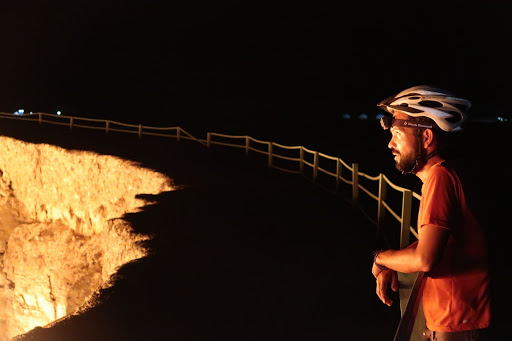 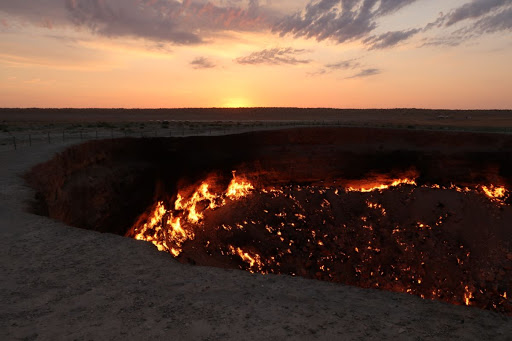 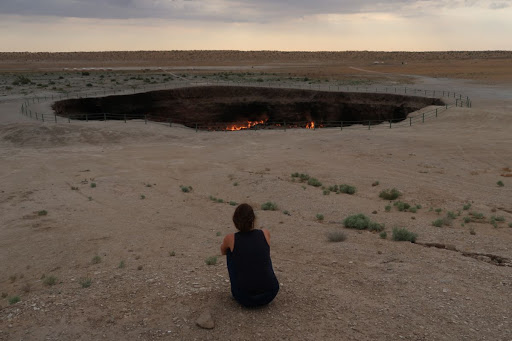 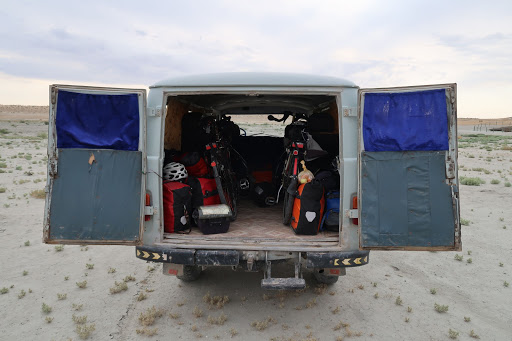 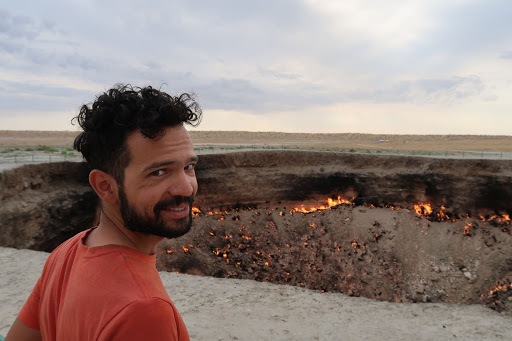 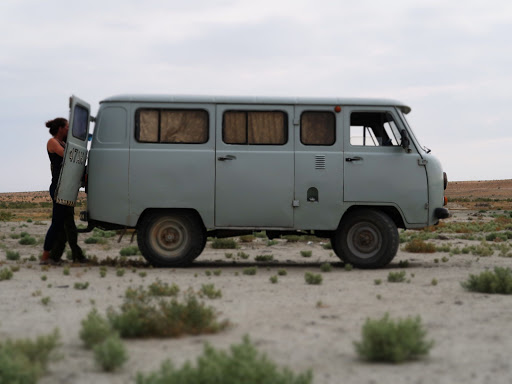 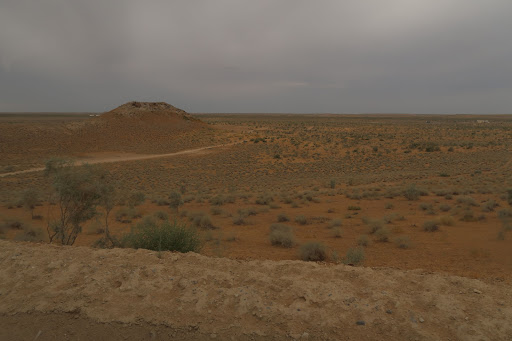 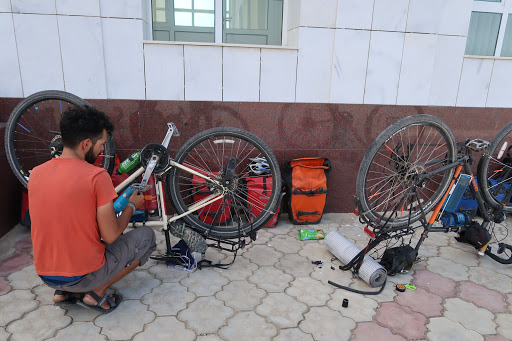 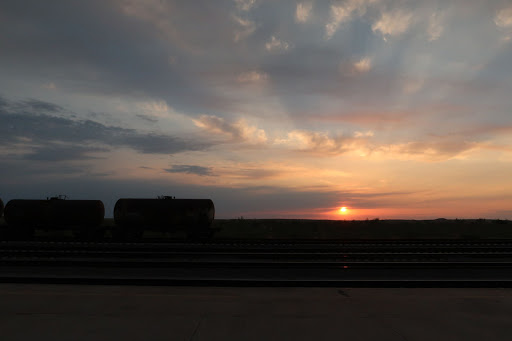 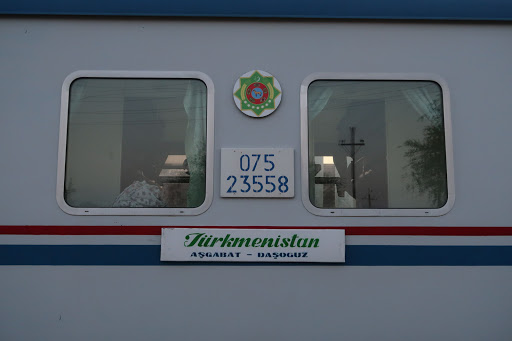 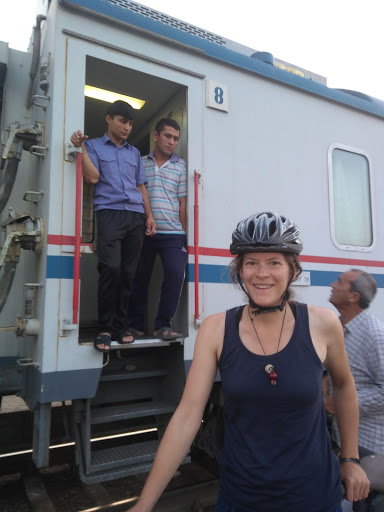